One, Two, Three Strikeouts for the Dairy

While Hawaii Dairy Farms (HDF) continues to ”believe that Hawaii’s milk should come from Hawaii,” it now seems unlikely that any milk will be coming from Mahaulepu. Recent government agency and court rulings constitute substantial setbacks for the dairy proposed to operate on 557 acres of Important Agricultural Land within Mahaulepu Valley.

Briefly and basically, in February of this year the Hawai’i State Department of Health (DOH) signaled that it would not find HDFʻs Final Environmental Impact Statement (FEIS) acceptable. Some of the publicʻs comments and questions had not received “clear point-by-point responses”, particularly regarding run-off, water and land usage. Mistakes were made in the documented history of the area.

HDF withdrew the FEIS.  Subsequently, DOH informed HDF that a second Draft Environmental Impact Statement, not just a supplement, would be required because Hawai’i law requires that “subsequent resubmittal of the EIS shall meet all requirements for filing, distribution, publication, review, acceptance, and notification as a new EIS. “  Furthermore, several substantive studies had been added to the FEIS, and the public had not been able to review and comment on these.

In March, the dairy lost County building permits for its large milking barn and other structures. Kaua’i Circuit Court Judge Randal Valenciano, acting in his capacity as one of 22 judges of Hawai’iʻs Environmental Court, ruled that environmental review – that FEIS – must precede issuance of any permits. This legal action was brought by Kawailoa Development Company, owner of the Grand Hyatt Kauai Resort and Poipu Bay Golf Course. Judge Valencianoʻs decision also means that, without an EIS, HDF cannot apply for a needed  National Pollutant Discharge Elimination System (NPDES) permit.

In June, Federal Judge Leslie Kobayashi signed a settlement agreement between Friends of Maha`ulepu (FOM), HDF, and Mahaulepu Farms, LLC, the subsidiary of Grove Farm Company which owns the watershed of Mahaulepu.  FOM brought the suit alleging violation of the Clean Water Act because of the consistently very high enterococcus bacteria counts (40-50 times above the acceptable standard) in Waiopili Stream, which flows through Mahaulepu and into the ocean.

The settlement did not assign responsibility for the pollution. However, along with imposing best management practices for existing erosion and monitoring of agricultural activity in Mahaulepu Valley, HDF is paying for a $125,000 Supplemental Environmental Project.  Under the auspices of David and Lida Burney of the Makauwahi Cave Reserve at Mahaulepu, remediation of the water quality of Waiopili Stream will be attempted by removing the tree canopy that shades the stream, vegetating stream banks to reduce erosion and creating more ponds and taro loi to hold sediments and provide habitat for endangered waterbirds.

The results of a high tech study, undertaken by the State DOH, to identify the sources of the pollution are due to be released soon, and formal DOH declaration that Waiopili is an “impaired” waterbody is also expected soon. As long as Waiopili Stream exceeds the State and Federal water quality standard, the State cannot issue an NPDES permit to allow any additional pollution.

At this point, Hawaii Dairy Farms does say that it intends to submit another EIS and that it is appealing the decision that resulted in having its permits revoked.  However, with no EIS and the need to remediate Waiopili Stream, the heavy black 699 to 2000 cow cloud that has loomed over Mahaulepu Valley for three years has lifted, drifted away and, likely, dissipated altogether.  This leaves the immediate challenge of developing suitable and site-compatible agricultural production on the agricultural lands of Mahaulepu. 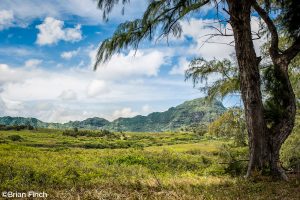 Many sincere and immense thank yous are in order

Thank you to Surfrider Foundation for its Blue Water Watch program which identified high bacterial counts in Waiopili Stream and pushed the Department of Health, with Friends of Mahaulepu, to uphold the federal Clean Water Act.

Thank you to the many, many concerned residents who signed Malama Mahaulepu and Friends of Mahaulepu petitions asking for an EIS.

Thank you to everyone (the public, nonprofits and resource experts) who digested the voluminous Draft EIS and sent questions and comments.

Thank you to Friends of Mahaulepu, notably Bridget Hammerquist  and Jay and Eileen Kechloian and others, who worked to educate people about the impacts of dairying, to raise money for legal action and to find Attorney Charlie Tebbutt, with his unique expertise.